Employees were working to get material to the 6th floor/Penthouse area utilizing the man-made cantilever wheel pulley. The pulley had to be used due to the elevators being down. Gribbins employees have utilized this pulley throughout the outage 100+ times lowering/raising insulation to ground level. Employee on the ground was pulling the rope with new insulation in a trash bag (< 40lbs.), which is tied on with a slip knot. The employee on the 6th level was pushing the rope toward the east away from utilities. A pipe/pipe-rack is secured to the 5.5 level platform. This is the only location where the pulley is not clear when being raised/lowered. The reason the employee was pushing the rope out, was that the man-made cantilever would not swivel, allowing the pulley to extend further to the east allowing complete clearance when being raised or lowered. When the bag was being raised, at the same time the rope was being pushed out, it caused the bag to swing getting hung under the pipes. At the same time this happened, ground man pulled the rope, contacting the pipe/pipe-rack, causing the bag to come loose falling approximately 100-120’ to ground level. Gribbins employees had a 20’x20’ red barricaded area, which is where the bag landed. No injuries or property damage. 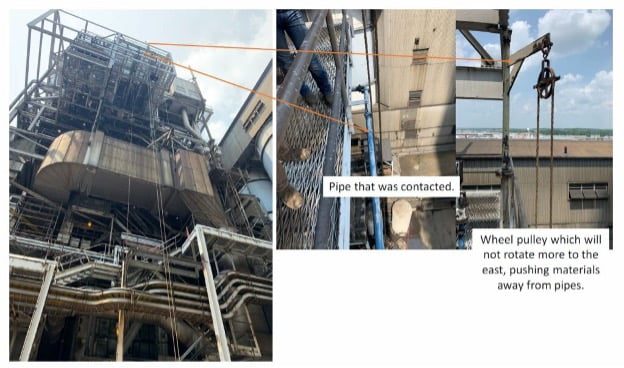