The Gribbins Safety STAR Program is a positive recognition program for all of our employees.  Any employee can nominate any other employee!  Each quarter, the safety department, area managers, and field coordinators will review all nominations and select up to 5 winners.  The winner and the nominator will each receive 20 bonus safety points.

Thanks to everyone who nominated a fellow employee!  During the voting process, all names and identifying characteristics are removed to ensure a fair vote.  The more detailed nominations seem to result in the winnings.  Give specific reasons and actions to describe why someone deserves to be recognized, so that you and the person you’ve nominated can win!

Congratulations to the winners from the first three months of 2018!

Ken Heatherly – While removing insulation around a steam line valve, Kenny noticed white, suspected asbestos material butted up to the fiberglass he was removing. He left the area immediately and reported the finding. The material was sampled and work suspended in that area until results are received. 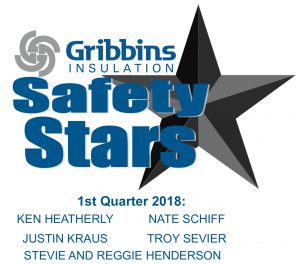 Stevie and Reggie Henderson – Two employees repairing metal on the Precip roof 100′ from ground level. This task requires removing several sheets of metal to access the sub girt system which broke loose from windy weather. After taking the lift to the 100′ level to survey damage and remove a few sheets, both decided the situation with the wind was not safe and came down.

Justin Kraus – Justin paid great attention to detail while instructing a new insulator foreman the proper procedures to take at Toyota while working on a night shift job. Justin explained the JSA process in great detail. He offered multiple suggestions to the new foreman as to how to remain safe while securing pins to ductwork using tuff bond adhesive (we are not able to bend the pins over using this method, resulting in a puncture hazard to anyone walking through the area). Justin also explained the Toyota safety procedure for utilizing an extension ladder to access the work area. I was very impressed with his attention to detail in regards to safety while also informing the new foreman of our scope of work.

Nate Schiff – Nate saw a giant icicle above a door, and he taped off the door so that people would not exit the door and get icicled to death.

Troy Sevier – Troy had to use a ladder for a quick touch up and got permission to borrow an electrician’s ladder that wasn’t being used and was nearby. As he moved it, he realized it was “rickety” and decided to go downstairs and get his Gribbins ladder which was in good shape instead of using the questionable ladder at hand.