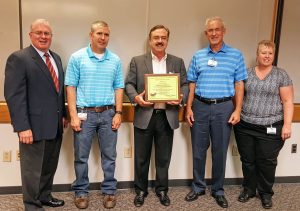 Gribbins Insulation earned recertification as a ‘STAR’ participant in the Indiana Voluntary Protection Program (VPP) for work performed by its team at Eli Lilly Company in Indianapolis. The VPP initiative is administered by Indiana Department of Labor (IDOL), which works cooperatively with OSHA and employers to proactively prevent fatalities, injuries and illnesses. According to a news release issued by IDOL announcing the recertification, the VPP is implemented “through a system focused on prevention, control, analysis and training committed to worker involvement.”

The ‘STAR’ recertification was presented to Gribbins August 30, 2017 during an annual field meeting and luncheon for the Gribbins Eli Lilly team in Indianapolis. The ‘STAR’ was bestowed by Rick J. Ruble, Commissioner, Indiana Department of Labor. Other key IDOL representatives were also in attendance. On hand to receive the ‘STAR’ were Jim Gribbins, President and Founder of Gribbins Insulation, and Gribbins Safety Manager, Trevor Atherton.

According to the IDOL news release, “Gribbins Insulation’s Eli Lilly Indianapolis site has an impressive clean slate for OSHA-recordable injuries and illnesses, with no recordable cases or ‘Lost Work Day’ cases for the previous four years. The national industry average Total Case Incidence Rate (TCIR) is 2.6 per 100 workers.” Gribbins received praise from IDOL Commissioner Rick J. Ruble, who enthused, “The company truly demonstrates how a culture of workplace safety and health can have a positive influence.”