On March 23, 2016, Gribbins Insulation was honored with the Indiana Governor’s Workplace Safety Award for Innovations in Construction. It is the fifth time since 2010 that Gribbins has received the award. 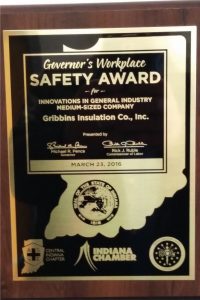 From the Indiana Department of Labor:
Employee involvement is the backbone of the company’s workplace safety and health efforts.  Gribbins has demonstrated effective employee involvement in many areas that include its Surveying At-risk For Elimination Program or “SAFE” for short. Employees are introduced to SAFE during new hire orientation. Employees are trained to conduct observations while working in the field. The company also uses employee safety surveys to gain feedback on the company’s safety and health programs and efforts and to “test” employee knowledge of policies and procedures.
The company’s three-year total recordable case rate is nearly 84% below its national industry average.

The Governor’s Workplace Safety Awards were announced at the annual Safety and Health Conference and Exposition held at the Indiana Conference Center in Indianapolis. The awards were presented to 8 Hoosier companies by Indiana Department of Labor Commissioner Rick J. Ruble.
Commissioner Ruble emphasized, “There is no greater achievement as a business or organization than ensuring all employees go home safely at the end of the workday.”
Accepting the award from Commissioner Ruble were  JD Smothers, Gribbins Vice President, and Trevor Atherton, Gribbins Safety Manager. A list of all winners can be found here.