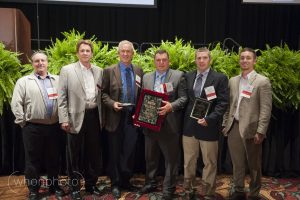 Indiana construction companies of all sizes submit applications for the prestigious MICCS awards program.  Gribbins Insulation was honored with a Safety Leader Award as one of the top five safety programs for the fourth consecutive year.  Each of these winners was then in contention for the coveted “Crystal Eagle” award.  A Gribbins client, BMWC Constructors, won the Crystal Eagle for the second consecutive year.  Gribbins Insulation previously was honored with the Crystal Eagle award in 2013.

Gribbins Insulation president and founder Jim Gribbins stated, “As an Indiana contractor for almost 30 years, we appreciate MICCS recognition of our program as a state leader. Our employees place safety in front of all actions, and this award honors each individual’s commitment.”

Gribbins Insulation consistently receives national recognition for its safety program. Other recent safety awards include the Indiana Governor’s Workplace Safety Award for Innovations in Construction and the Platinum Safety Award from the National Insulation Association, the highest honor from the national trade association for mechanical insulation. In 2011, Gribbins Insulation was honored as one of America’s Safest Companies by EHS Today, and in 2012, the National Safety Council selected Jim Gribbins, president and founder, as one of eight CEO’s Who Get It.

The Metro Indianapolis Coalition for Construction Safety, Inc. (MICCS) is dedicated to the elimination of construction and facilities maintenance jobsite injuries and illnesses with the ultimate objective of returning construction and maintenance workers home to their families, friends, and communities free from harm. Learn more at www.miccs.org.