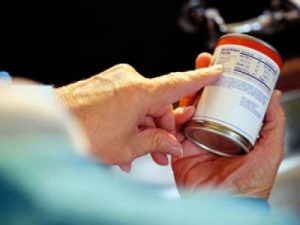 From the National Safety Council

Consumption of caloric sweeteners such as sugar increased 39 percent between 1950 and 2000, according to the U.S. Department of Agriculture. Because excessive sugar consumption can raise insulin levels, cause tooth decay and make it difficult to maintain a healthy weight, many health experts are concerned by the ever-increasing amounts of sugar in the average American diet.

Unlike many vitamins and nutrients, a recommended daily value for sugar does not exist. The 2010 Dietary Guidelines for Americans simply suggests individuals limit their daily intake to no more than 10 percent of total calories from added sugars. “So if you are eating 2,000 calories a day, not more than 200 calories – or 50 grams – should be added sugars,” said Christine Gerbstadt, M.D., spokesperson for the American Dietetic Association. Consuming too much sugar also may lead to weight gain, according to Gerbstadt, who said sugar is easily stored in the body as fat. Additionally, it robs the body of nutrients such as niacin and riboflavin, which help regulate metabolism. There are different forms of sugar, including table sugar, fructose (which occurs naturally in fruit) and lactose (which occurs naturally in dairy products). “From a chemical perspective, these sweeteners all have one common characteristic: they provide 4 calories per gram with little else in terms of valuable nutrients like vitamins and minerals,” Gerbstadt said. “This is why sugar is often referred to as ‘empty calories.’” However, she points out that consuming sugar from natural sources such as fruit, vegetables, grains and dairy products is not inherently unhealthy because these foods come with added nutritional benefits. Rather, it is the added sugars in processed foods that are the main cause for concern.

Sugars can be hidden in a surprising number of products, and may appear on ingredient lists under a number of different names. “They creep up in barbecue and pasta sauce, and canned fruits are loaded with it,” Gerbstadt said. “Scrutinize food labels for refined sugars that go by other names.” The USDA points out that sugar often is listed on food labels under the following names:

Additionally, the FDA approves a number of sugar alcohols, which are manufactured versions of the carbohydrates found in fruit. Although these are found in some processed food items, they generally are not used for food preparation in the home. According to the Mayo Clinic in Rochester, MN, these artificial sweeteners provide some possible health benefits, mainly weight control. One teaspoon of sugar contains about 16 calories. If you consider that a 12-ounce can of pop contains 8 teaspoons of added sugar, that means 130 calories could be omitted from your diet if you drank pop that was instead sweetened with a zero-calorie artificial sweetener. Also, the Mayo Clinic points out that artificial sweeteners do not elevate blood sugar in the way table sugar does, making it a good alternative for individuals with diabetes. Yet, in spite of these potential health benefits, artificial sweeteners have been under scrutiny by the scientific community since their inception. Critics have suggested these sweeteners may cause a variety of health ailments, from cancer to attention deficit hyperactivity disorder. The National Cancer Institute and other health agencies contend there is no sound evidence that approved sweeteners increase the risk of cancer or any other health problem. Gerbstadt pointed out that only sweeteners that have passed rigorous tests have been approved for sale, so consumers should not be concerned about the safety of artificial sweeteners. As far as health is concerned, she said “the best rule of thumb is to consume all foods in moderation. A reasonable amount is two servings or less per day.”

Due in part to people’s concerns about sugar and artificial sweeteners, a number of products have begun marketing themselves as the “natural” option in sweetening food. Agave nectar, maple syrup and honey are among the sweeteners billed as being healthier because they are natural, yet Gerbstadt pointed out that “natural” is a term with no actual legal definition. Sweeteners such as these are not calorie-free and they can lead to tooth decay, so, as with standard table sugar, moderation is key. Gerbstadt further cautioned that diabetics should consider honey and agave nectar the same as sugar because these products will have the same impact on blood sugar.

Because it is inexpensive to produce, high-fructose corn syrup is used in a wide variety of processed foods, from pop to bread and salad dressing. Lately, the health and safety of the substance has been called into question. A study in 2010 from Princeton University suggested HFCS may lead to weight gain. In the study, rats that were given access to HFCS gained more weight than those with access only to table sugar – even when the overall calorie intake of both remained equal. “When rats are drinking the high-fructose corn syrup at levels well below those in soda pop, they’re becoming obese – every single one, across the board,” said research associate Bart Hoebel. “Even when rats are fed a high-fat diet, you don’t see this; they don’t all gain extra weight.” However, the American Corn Growers Association disputes claims that HFCS is at the root of the nation’s obesity epidemic, pointing to the fact that obesity rates have continued to climb in spite of HFCS consumption declining in recent years. Although they are not identical, Gerbstadt said “calorie per calorie, there is little physiologic or nutritional difference” between types of HFCS and table sugar. “The concern may be in the fact that HFCS is added to an enormous variety of commercially processed foods, which adds up in calories.” In consuming HFCS – as with sugar, artificial sweeteners and sugar alternatives – moderation is vital to protecting your health, Gerbstadt said. “In moderation, none of these are inherently bad for you, but regular use may keep you shackled to a sugar habit.”